What Apple’s Privacy Push Means for Your Digital Advertising

* This post was originally published on December 30, 2020. Scroll to the bottom for the latest updates.

A new Apple iOS policy increasing privacy options for its users could impact how well your digital advertising performs in the coming months.

What Apple Is Changing

Earlier this year, Apple announced its next iOS 14 update will include an option for users to opt out of any in-app data collection in apps like Facebook and Instagram.

The update gives users the option to block the IDFA (Identifier for Advertisers), which means that iOS will cloak their personal info, but still provide in-app data: 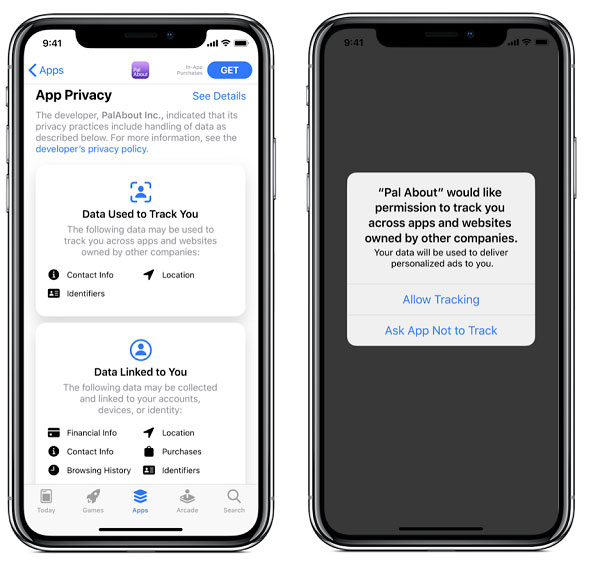 Apple’s position is that users deserve an opportunity to choose whether or not their data is collected.

In response to the backlash from advertisers and specifically Facebook, Apple released this statement:

“We believe that this is a simple matter of standing up for our users. Users should know when their data is being collected and shared across other apps and websites — and they should have the choice to allow that or not. App Tracking Transparency in iOS 14 does not require Facebook to change its approach to tracking users and creating targeted advertising, it simply requires they give users a choice.”

Facebook has publicly come out with a direct response, launching press releases and ads positioning themselves as an advocate for small businesses: 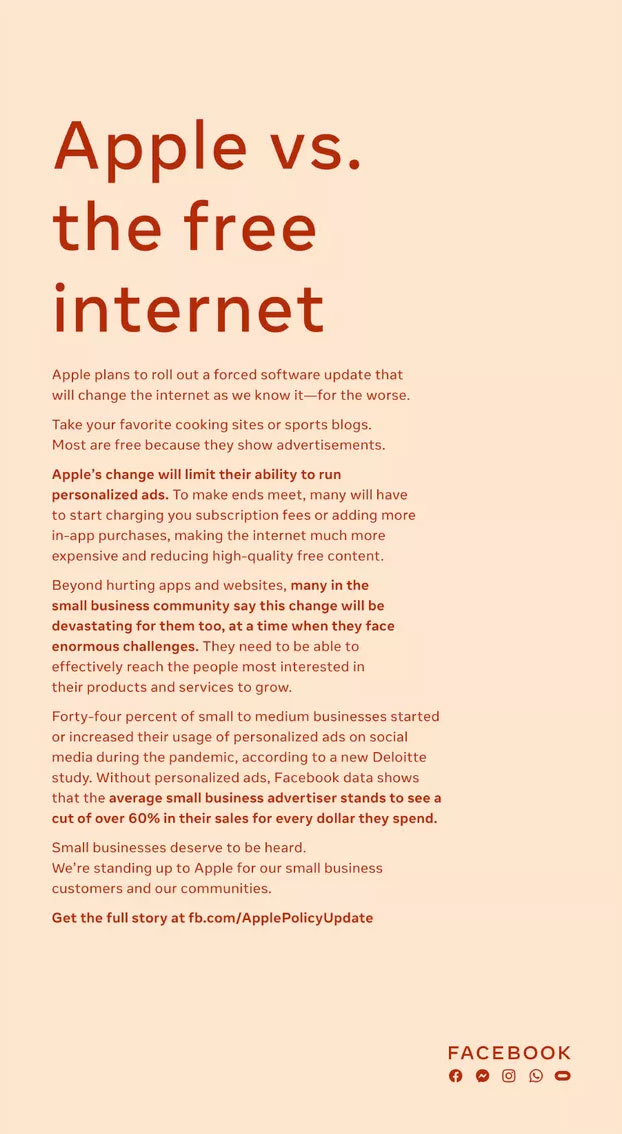 Facebook has cited tests and use cases on how the change will dramatically reduce the effectiveness of advertising on Facebook.

In the ad, they claim that the average small business advertiser stands to see a cut of over 60% in their sales for every dollar they spend.

That’s a huge reduction in ROI on Facebook advertising, and it could have some very real consequences for your upcoming digital campaigns.

Will the Impact Be As Dramatic As Facebook Makes It Sound?

It’s hard to say until we see how the changes impact campaigns in real time.

However, the response to Facebook’s stance has been contentious.

A recent article in Wired argued that Facebook is primarily concerned about a dip in its profits rather than the welfare of small businesses, and that the impact might even be beneficial in the long-term by creating a more fair Facebook ad marketplace.

Increased privacy may not necessarily mean decreased advertising results, but we’ll have to wait and see.

So far, Facebook hasn’t announced any changes of their own, focusing their energy on publicly criticizing Apple.

Facebook’s own policy changes around election cycles and their response to privacy concerns with data breaches have led to more hoops to jump through for advertisers like lengthier, inconsistent ad approval processes and uneven ad distribution.

As Apple’s update goes into effect, we may see Facebook respond with tactical changes to the advertising model and algorithms. In the meantime, we’re on our own.

How Are Marketers Responding? 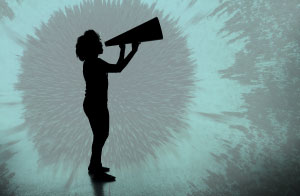 With the new Apple policy change, marketers are calling for Facebook to open up its algorithms and promote increased organic visibility for smaller pages.

There are also loud calls for Facebook to adapt their paid advertising model to include more transparency for marketers and new measures for better targeting.

The new update from Apple – and no new updates from Facebook – will affect advertising in two known key areas:

Those are the known changes. There may be lots of ancillary consequences with the update itself or with these tech giants tweaking their algorithms and responding in real time.

What Does This Mean for My Upcoming Digital Campaigns with Magneti?

We’re keeping a close eye on the data, studies, and results that are arriving from the new Apple update and its impact on paid advertising through Facebook & Instagram. 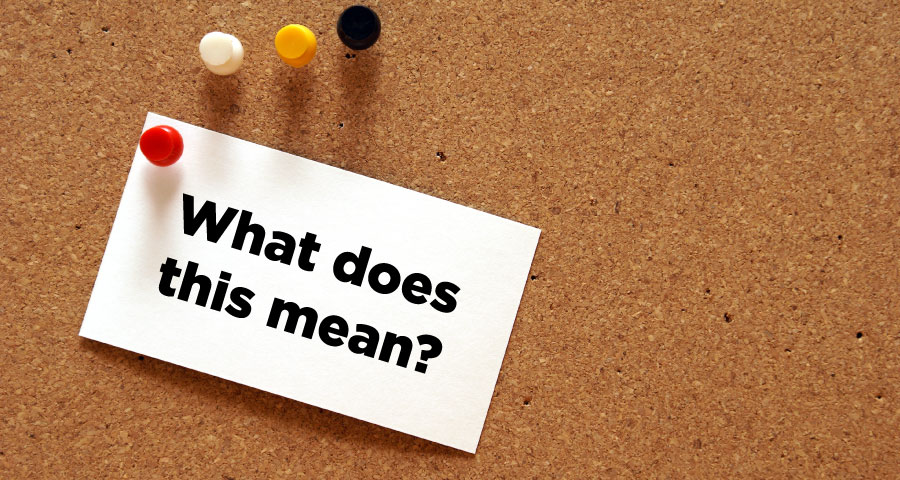 If you’re advertising on those channels with us, especially with a smaller, limited budget, we may see an increase in the cost-per-click it takes to get a qualified lead in the next few months. 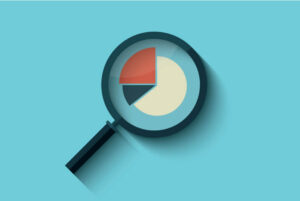 If we see an impact on results, we may shift your budget to other paid promotional channels like Google Ads, and spend more time on earned and owned channels like email, organic social, or web work with the goal of increasing your organic rankings.

While Facebook has historically been the gold standard for quick, limited-budget growth through paid PPC advertising, we’re seeing the landscape change in real time.

Chat with your AMs and MMs about where you can pivot for lead gen activities and for more transparent ways to reach your audience effectively.

What You Can Do in the Meantime

While tools like Facebook’s algorithms have done the hard work of finding our audiences for us, changes like this make it more important than ever to own that information yourself.

Outside of lead gen, in-depth research on your audience and their behaviors is one of the most valuable ways to invest your marketing dollars.

Don’t rely on an algorithm to tell you who your audience is – especially when it can change overnight.

I want to own my own audience targeting information.

Facebook has recently rolled out a resource center to help you prepare for the changes. 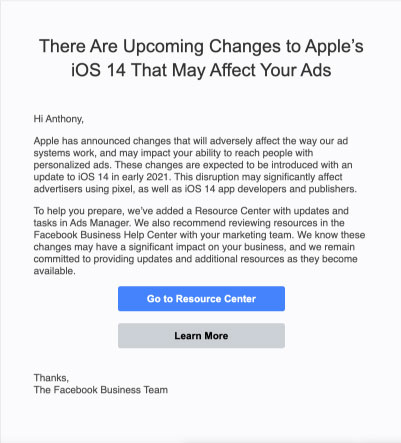 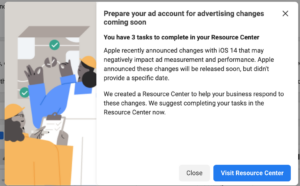 When we clicked inside, we found a few snippets of information from Facebook with zero action to take:

The information includes three “updates” that are worth exploring a bit: 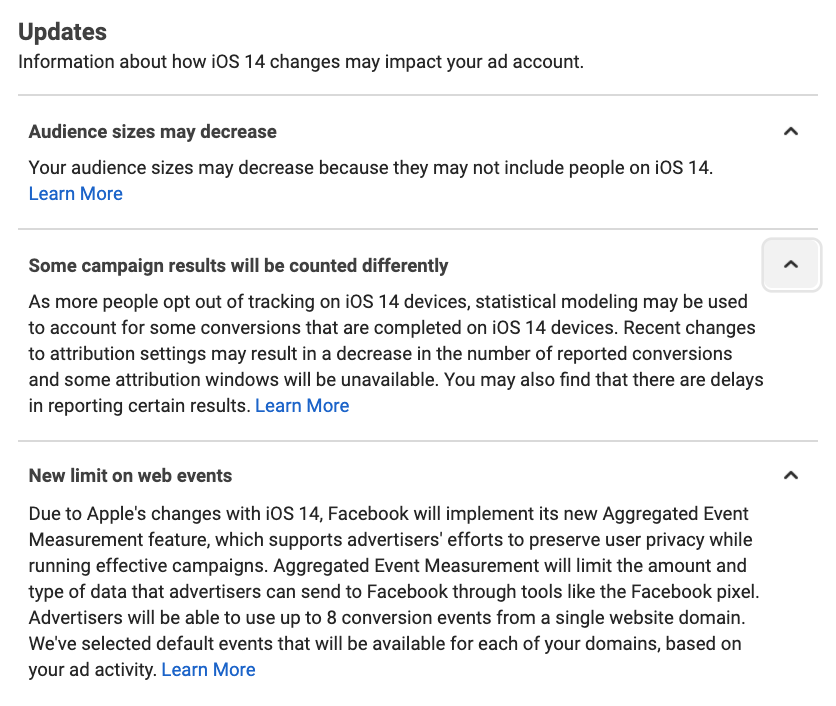 The first two informational blurbs match what we’ve heard from Facebook: smaller audience sizes and less accurate reporting due to the increased privacy.

The “New limit on web events” section, specifically the line “Advertisers will be able to use up to 8 conversion events from a single website domain,” is new information and means that if you’re running campaigns and planning to track conversion types like Lead, Purchase, Landing Page View, etc. in Facebook via an installed pixel, you’ll now be capped at eight at any given time.

Should I be worried about that? Probably not. It’s rare for any single organization to be tracking that many different types of conversions in the first place.

The latest we’ve heard from Apple is an “early spring” release. Meanwhile, you can track the whole development of this Facebook vs. Apple dispute, including the latest updates, with this timeline put together by Inc.

News on iOS 14.5 timing! Plus a few changes from Facebook you’ll want to keep an eye on.

Apple announced in a press release on Tuesday that the new iOS update – iOS 14.5 – will launch the week of April 26. When exactly? They didn’t say.

The changes include a few ordinary software updates:

And the changes also include the major privacy update we’ve been waiting for:

We’ll have to wait and see. Facebook has hinted that advertisers will see lower overall PPC results, so keep a close eye on your Facebook paid performance once the changes hit – especially if iOS users represent a large portion of your audience.

For our clients, we’ll do the same and may shift budgets towards other paid channels or marketing activities if we see large changes from the iOS update. Being nimble with your spend is key to navigating a constantly-shifting paid landscape.

The pixel is losing its power and changes are on the horizon for how Facebook tracks ad interaction.

While that may sound jargon-ey and inconsequential, here’s a quick Q&A between two of Magneti’s digital marketing experts walking through the changes with iOS 14.5 and covering the latest Facebook updates:

(And yes, that is a cardboard cutout of Justin Bieber in the background).

It’s been an eventful summer as we drift into the cooler temperatures of fall, and a lot has happened with paid advertising.

Was it the death of retargeting? An obituary to Facebook advertising? An epitaph harrowingly etched on the ad budget gravestones of this social media giant? 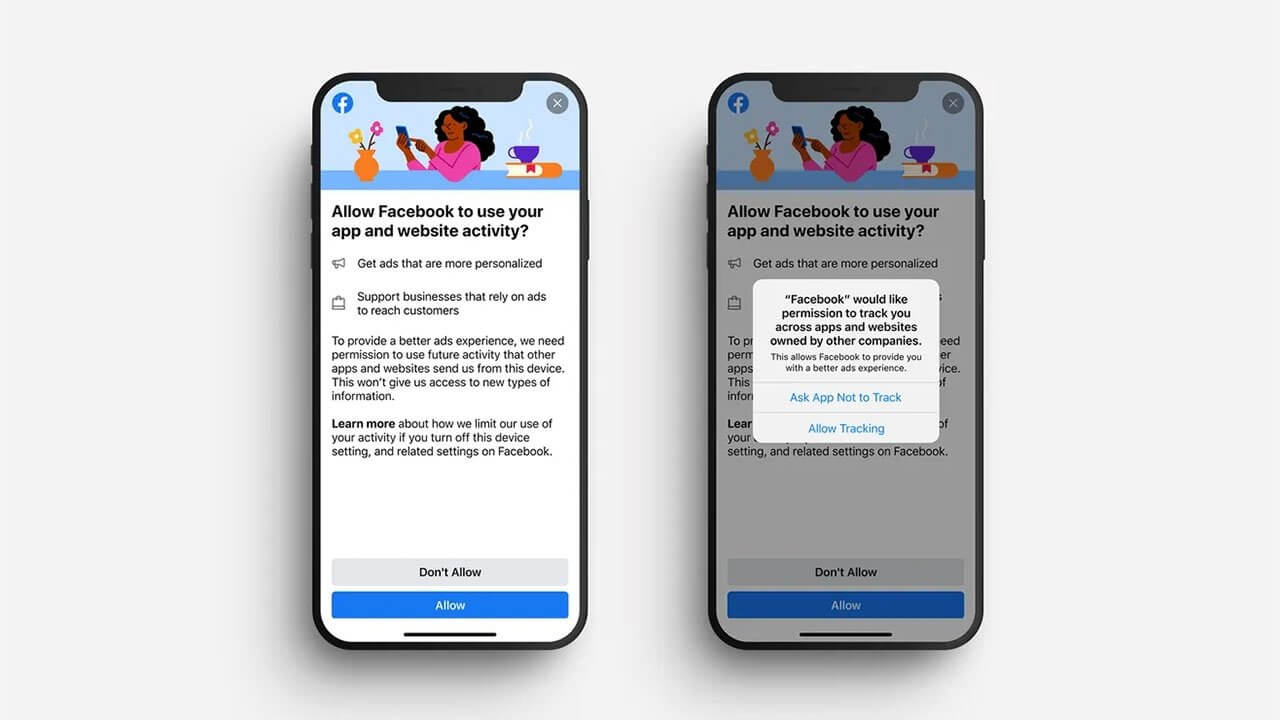 Not really. Yes, we did see some changes, but they didn’t cause us to seismically shift our approach to paid advertising.

The biggest surprise is how many users have chosen to opt out of data tracking.

Industry predictions were all over the map, guessing at the percentage of users who would opt themselves out. We saw estimates that ranged from 40 – 75%. Some were more optimistic, estimating that we’d only see a 20% drop.

So what actually happened?

Data is showing that 96% of users are opting out of data tracking. The push for more user privacy is being welcomed with open arms by Apple device owners.

…And when you read the messaging in that pop up notification, it’s easy to understand why.

3 Things to Keep in Mind with the Latest Changes:

Google’s remarketing features and the ability to target users based on search intent still makes it a compelling paid advertising channel that you can use to grow and scale marketing efforts.

While Google has talked about phasing out cookies in the next year, it’s still an excellent channel to pair your ads with something showing search intent.

If you have a substantial email list of followers who have opted in to hear from you, uploading that list in the Facebook and both (1) retargeting them and (2) building campaigns off a ‘lookalike’ list of your subscribers can drive some of the highest paid results.

In Magneti’s own PPC marketing, lookalike audiences built off our email subscribers is the tactic that’s performed best at serving and reaching new, qualified audiences.

3. Facebook’s retargeting lists based on site or page visits are still worth investing in and monitoring

What marketers were predicting did come true, but the impact on results was nowhere near as dramatic as it could’ve been.

Facebook retargeting has gone down a bit in effectiveness, especially as the wave of user opt outs has grown progressively larger, but it’s still a channel you can test for relatively cheap.

If a portion of your target audience is operating on non-Apple devices, you might still see a high ROAS (return on ad spend) from retargeting.

The push for user privacy among tech giants is growing, and it will continue to impact the world of paid advertising. We’ll keep you updated as more changes come into play.

Working with Vendors? Make Sure You Own Your Marketing